There are lots of reasons to become a member of Medicinska Föreningen. You can choose all of them or select some of your favourites.

Being a member of MF is optional, but in order to participate in the activities organised by the student union bodies you need to be a member. As a member of MF you also get the same discounts as non-members such as obtaining student discounts coupled to the Mecenat card given to you by MF but also other offers sent out via e-mail or the website. You will also have member-friendly prices to participate in parties organised by the Entertainment Committee (PrU) on behalf of the student union.

To get in touch with the student life in Stockholm, the quickest way is via MF. We have a vast range of sections, societies, committees and other bodies. All of these are supported both financially and from an administrative perspective by MF. It is in these bodies that things are happening and it is where you will make friends for life!

Getting involved in the student union is the best way to meet new friends and to make sure that your time at KI isn’t only about studying! Whatever you like, there is something for you here, and if we don’t have it – contact us and we’ll help you start it up!

Find more information about all our societies, committees and sections here. As a member you also get discounted prices on all our activities, events and parties!

The services that MF can provide in the area of student help are not always member exclusive but we hope that you would like to support our work by investing in a membership. In this area we have the following services: 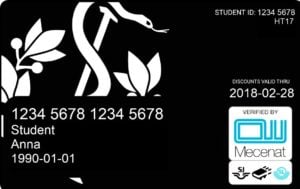 The Mecenat card is your student ID, a proof that you are a student and entitled to student discounts. With the card you will get student dicsounts from Mecenat but also MF exclusive discounts!

We think it’s great that everybody gets the Mecenat card, since we think that everyone should be able to use the student discounts. However, we wanted to give our members something special, and we also felt that it is important that our members easily can identify as MF members. Therefore, we designed our own Medicinska Föreningen Mecenat card! With the MF mecenat card you get all the regular mecenat student discount and also MF exclusive discounts! It has a black background and our MF logotype in white – very clean and very cool! With this card you can easily prove that you are an MF member at our parties and activities to get discounts. You also have to show this card if you’re about to use any of our other exclusive student association discounts. Read more about these discounts here.

After you have paid your membership fee it takes about 2-3 weeks before you receive the Mecenat card. If you need your card faster, you can download the Mecenat mobile app or order an sms certificate for the SL discount.

The public transportation in Stockholm is owned by SL (Stockholms Lokaltrafik). They are in charge of the subway, buses, trams and commuter trains.

Doctoral students get their activity registered in Ladok afterwards, which is why Mecenat instead looks at the previous semester to decide whether you get the SL logo or not. If you are planning on being more than 75 % active the current semester, but don’t have enough activity from the previous semester, you need to prove this directly to Mecenat in order for them to give you the SL logo. Your first semester registered as a PhD student you automatically get the SL logo on your Mecenat card.

More information about the SL discount can be found on mecenat.com.

In case you need to prove that you are entitled to the SL student discounts before you have received your Mecenat card, you can download the Mecenat mobile app or order an sms certificate from Mecenat. Remember that you always have to carry a valid student ID (the physical Mecenat card or the card in the mobile app) with you at all times when you travel with the SL student discount to not risk fines.

With your MF Mecenat card you get, besides from all the Mecenat discounts, MF specific member discounts! You also get reduced prices at all our activities, events and parties!


All MF-members get a 5% discount at Stetoskop.dk if using the member discount code when shopping.

E-mail [email protected] to get the discount code.

MF members get a 15 % discount when buying a training card at Klättercentret and when booking the basic indoor climbing course at some of Klättercentret’s facilities in Stockholm.

Read more about Klättercentret, their facilities and opening hours at hwww.klattercentret.se. 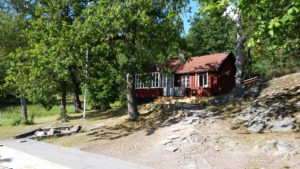 Rent our beatiful sports cabin Solvik for the member price!

At our student union service desks you can get a student booklet with lots of discounts! 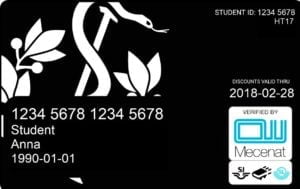