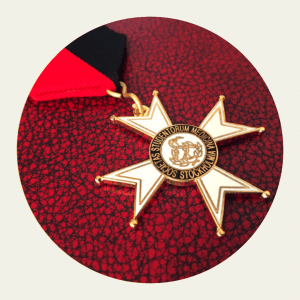 We congratulate and thank this autumn’s recipients of Crux Parva Medicorum! The honorary medal is awarded on the 14th of November. 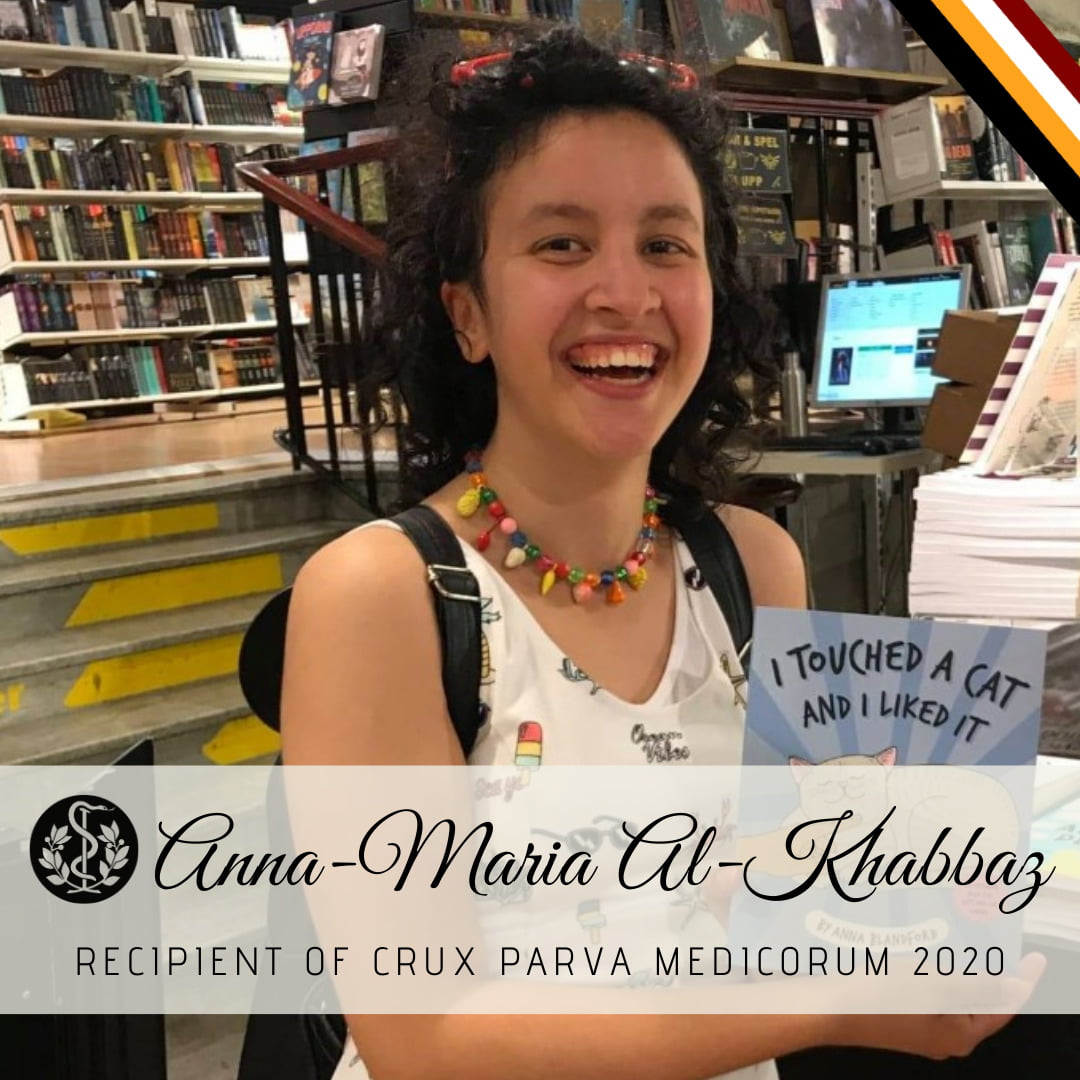 There are few people who have been as active in the introduction to new students as Anna-Maria, where she for three years has been making sure that new students at the medical programme get as good an introduction as possible. Anna-Maria’s warm personality, charisma and ability to make people feel included is a great asset for Medicinska Föreningen, and we surely have Anna-Maria to thank for many new students who have opened their eyes to our community. Anna-Maria has also been an important part of the skit groups where she has done many things behind the scenes, such as PR, decor, fika and scriptwriting.

For her invaluable work within Medicinska Föreningen, the Board has chosen to award Anna-Maria Al-Khabbaz the honorary medal Crux Parva Medicorum. 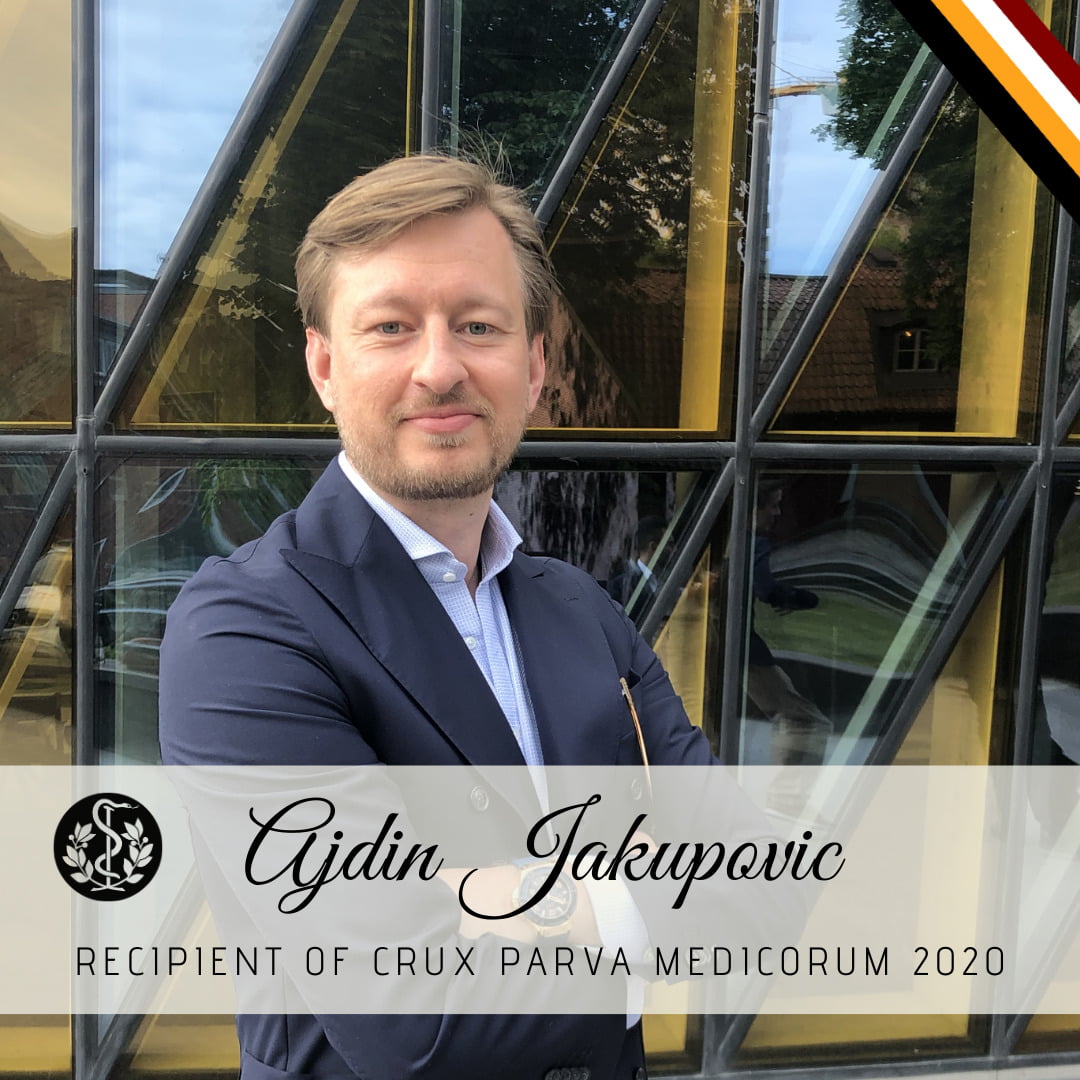 Most people are not students forever, and continue into working life after their studies. But how do you get into the work sector, what opportunities are there? As chair of the Business Committee, Ajdin worked hard to reduce the gap between students and working life by introducing students to different companies and offering them a platform for creating networks. As an active member in Medicinska Föreningen, Ajdin was always available for questions, and he never hesitated to extend a helping hand when needed.

For his invaluable work within Medicinska Föreningen, the Board has chosen to award Ajdin Jakupovic the honorary medal Crux Parva Medicorum. 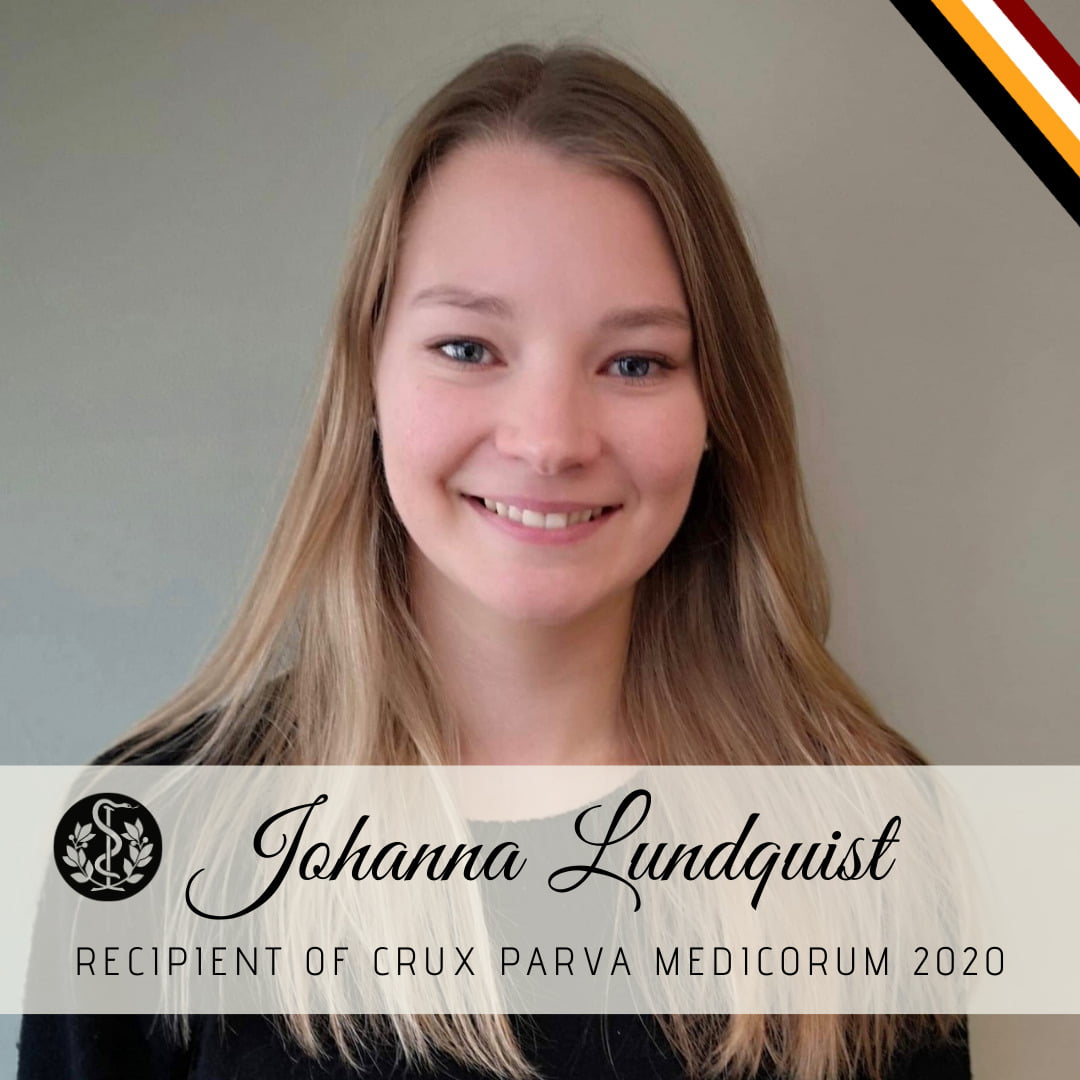 During her five years at Karolinska Institutet, Johanna has shown enormous commitment within the skit groups Flix and Corpus Karrolina for many years. In addition to taking on positions of responsibility as chair, producer and vice chair and most other board positions, she has always taken care of everyone in the association and stood up in all conceivable situations. In addition to this, Johanna has played a significant role in the medical programme’s introductory activities to new students.

For her invaluable work within Medicinska Föreningen, the Board has chosen to award Johanna Lundquist the honorary medal Crux Parva Medicorum. 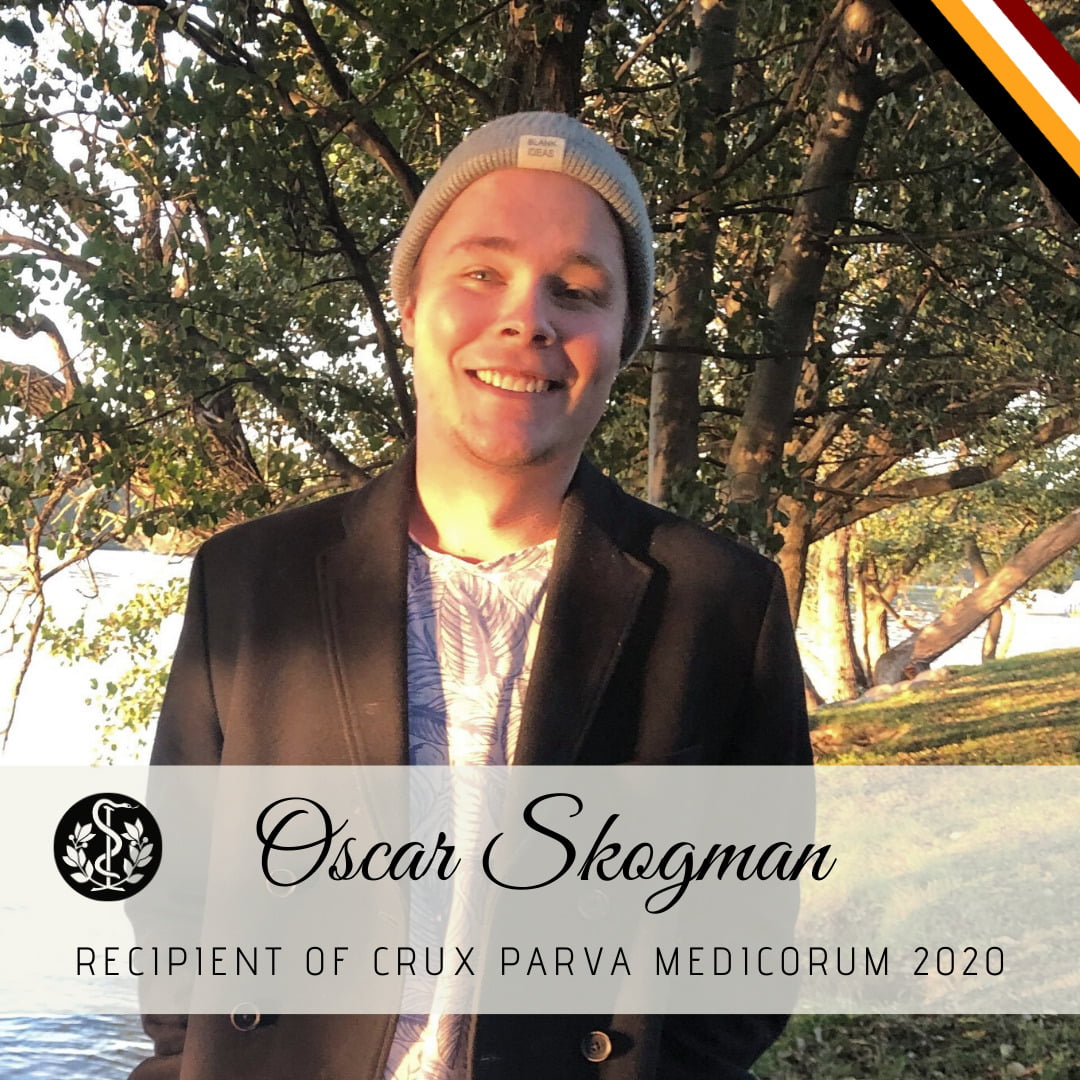 If there is one thing that Medicinska Föreningen always has been in desperate need of, it is improvement work, especially in the area of documentation to make the organisation work as smoothly as possible. During his time as ekonomiansvarig (treasurer) in the Programme Committee, Oscar worked hard to make things easier and more smooth for everyone working pubs and events. He developed a better cash counting system and helped simplify the use of the iZettle system.

For his invaluable work within Medicinska Föreningen, the Board has chosen to award Oscar Skogman the honorary medal Crux Parva Medicorum. 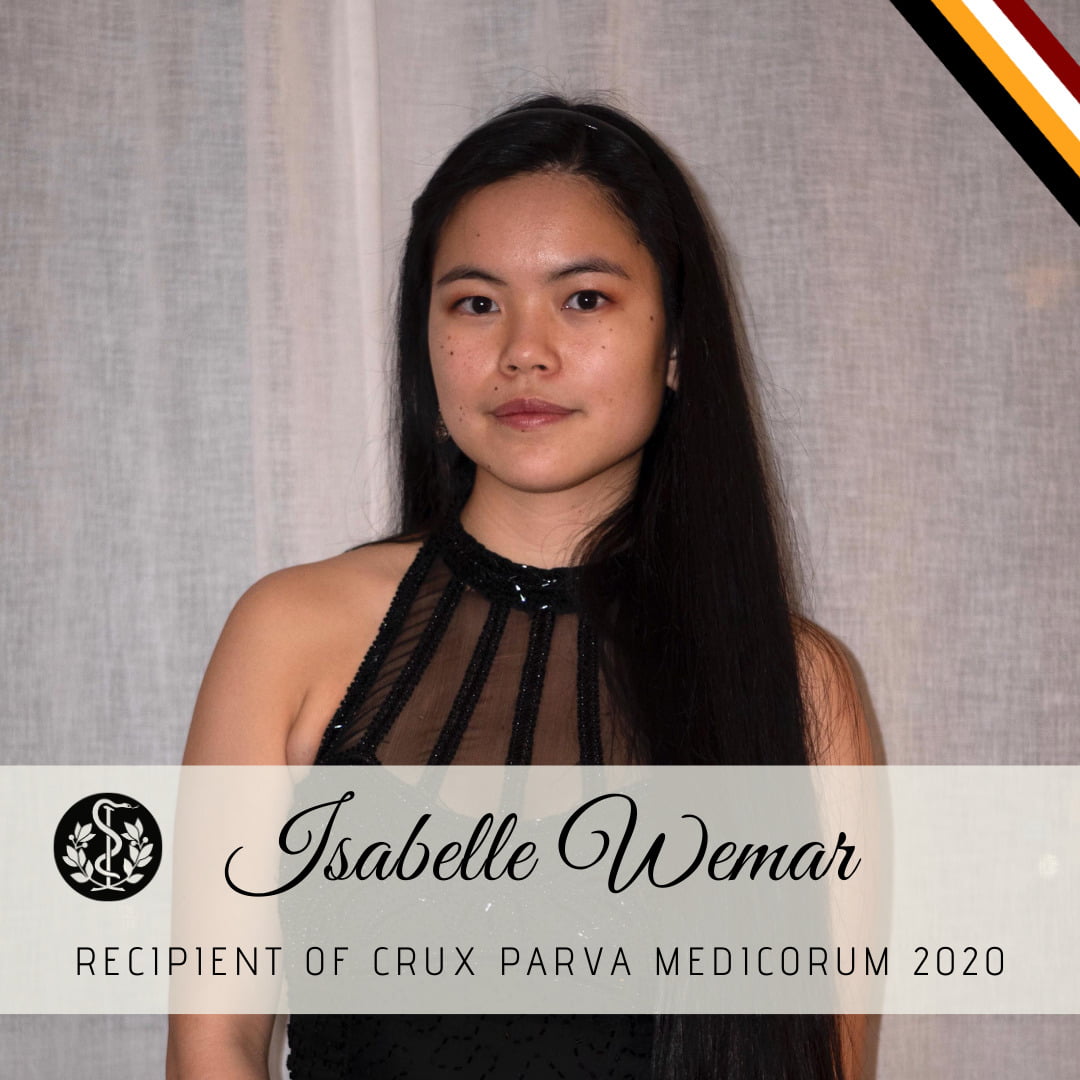 Going to sittings and balls is wonderful, and the pictures taken to capture the moments are something that you occasionally look back on to experience the feeling again. Isabelle has worked hard to lead the work of the union photographers, which for two years almost only consisted of Isabelle. She also shouldered the great responsibility of being the editor-in-chief of Medicinska Föreningen’s magazine Medicor for two years, a difficult task that has not yet found people who can fill her shoes. Few people’s work within MF has reached all the way to the members’ own homes – but Isabelle’s has.

For her invaluable work within Medicinska Föreningen, the Board has chosen to award Isabelle Wemar the honorary medal Crux Parva Medicorum.