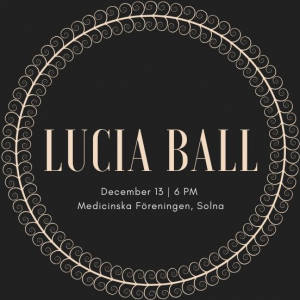 The Lucia Ball is the most solemn event held at Medicinska Föreningen and is arranged annually on the 13th of December by the Programme Committee. The 13th of December is also the date that King Karl XIII founded Karolinska Institutet in 1810 which makes it an even more solemn evening. The evening offers a dinner with great food and entertainment, by among others A Scalpella and the skit societies Corpus and Flix, and thereafter live music by Stroket and Blåslaget. Some of Medicinska Föreningen’s highest medals of honor are awarded at the Lucia Ball. Some years even the Nobel Prize Laureates in Physiology or Medicine come and celebrate this evening with us.

The sitting is soldout but you can sign up for the waiting list and get a ticket if someone cancels!

When?
The 13th of December

Come and dance with us all night long, everyone is welcome! No registration needed.