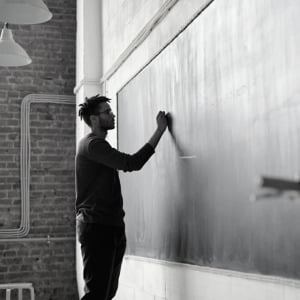 Nominate for Mäster
– in memory of Dan Grandér

The award Mäster is awarded to someone who has been teaching for an extended period of time in an inspirational and pedadogical way, or who initiated and implemented lasting improvements in the education.

Mäster is awarded in memory of Dan Grandér at the suggestion of student union members once a year to a teacher – or exceptionally several teachers – involved in the education of Karolinska Institutet’s (KI) students.

Do you have a supervisor or teacher who deserves the honor of the title Mäster? Nominate them! And make sure to gather some of your classmates/your section/other members of MF, since the nomination needs to be supported by at least five members of MF.

When the nomination period is over, the Education Council will present three candidates from received nominations, which all student union members can then vote on. The person with the most votes will be awarded Mäster – in memory of Dan Grandér 2021.

Mäster – in memory of Dan Grandér

In 2021, Mäster will be awarded for the first time in memory of Dan Grandér, recipient of Mäster 2010.

Recipients of the award receive a silver nameplate, a diploma from Medicinska Föreningen, and a prize sum of SEK 50,000 from Dan Grandér’s brother Jonas Grandér through Familjen Einhorns Stiftelse. Mäster is awarded at the Lucia Ball on December 13th.

If you have any questions you are welcome to contact the chairperson of the Education Council, Isabela Möller, at [email protected].

The union election Kårvalet 2021 is approaching
Scroll to top